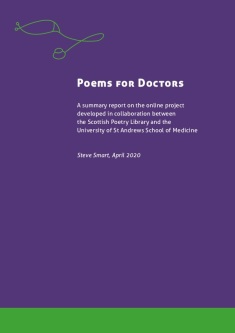 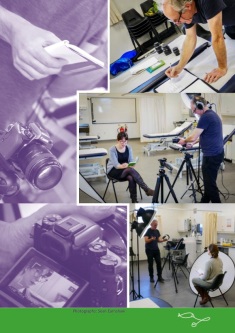 Poems for Doctors is a collaboration between Scottish Poetry Library (SPL) and the School of Medicine at the University of St Andrews. For that project over about three years I made a collection of 28 video readings of poems from an anthology about experiences in healthcare. The readings were (mostly) not given by their authors, but by medical professionals working in the NHS, who also explained why they chose the particular poem that they read. All of this went online via a blog, and various social media postings.

As the project recently moved into a slightly different phase it seemed an ideal point at which to prepare a summary report on work done so far. I think it’s often very useful to have a document like this to refer to, and to help interested parties quickly gain an idea the scope of what has been achieved.

In the report I used combined colour elements from two publication runs of the anthology Tools of the Trade: Poems for new doctors with simple graphics developed to accompany the online project, video screen-grabs from the films, and production stills. These design elements were used to bring together project timelines and quotes from participants and social media group members to create a colourful and lively tour of the many areas with which the project had become involved.

The result was distributed to interested parties either as pdf or as a 20 page spiral-bound A4 booklet.